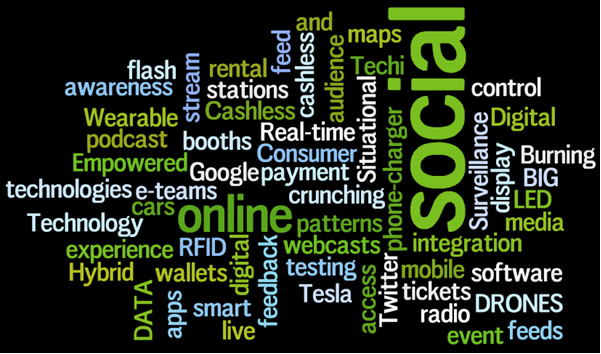 “Looking Ahead: Where Might Technology Lead Our Events in the Future?”

a summary of the panel discussion, October

The panel met at the International Festivals & Events Convention in Kansas City September 2014. It consisted of:

The panel members were all highly experienced in this field. They had current on-the-ground practical experience as well as the theory behind the use of technology.

The members of the panel all agreed that this rapid development of technology and the related IT will continue at a pace.

The main part of the discussion concerned the cashless event and the monetization of the new use of technology.  The panel members were concerned that the new technology has taken money from other areas of the event. An example is the various forms of webcast from an event and phone recordings, which may reduce attendee numbers and loose possible TV broadcast funds. At this stage the panel felt there was no viable way to charge for this.

The second major issue was the cash card or prepaid card. The advantage of using prepaid cards is the complete control over the onsite economics. Transactions are easily tracked and the data can be mined for all kinds of useful information. The sale of consumables on site that need to be replenished immediately, such as beer, is one example.  The attendee fills the event prepaid card at the start of the event and any remaining money can be used after the event at other participating retailers. . It was the general consensus that the prepaid event card is the immediate trend.

The question was then why not use the mobile phone as a ‘paycard’ using QR code  technology. This introduces an extra ‘level of failure’ as the attendee’s phone needs to be linked with their bank. These wifi or phone connections are a problem on site and even the use of COWs ( mobile Cell site On Wheels) does not solve it at this time.

The panel used to term “integrity of the wireless connectivity” to describe this situation. It has to be faultless if the merchants (vendors) are to use a cashless system.  The normal failure rate expected by us all in normal day to day wireless connectivity can not be tolerated when merchants are involved at an event.

Connectivity and the shared experience

Wifi is now mandatory at events. It enables the attendees to have a new world of shared experience. This means for the event manager that the integrity of the Wifi connections is vital and the ability to work during times of maximum use i.e. capacity planning.

The silent disco was successfully tried by a number of the panelist and audience members at their events. They were surprised by its popularity. In the silent disco, each member of the audience has a headphone and the music broadcast to the headphones. There can be different channels so that the audience members can chose their music ‘station’. Surprisingly there are as many people watching the people dancing in silence as there are dancers. The spectacle is an extra attraction for the event. In one case the event company charged entrance fee for the silent disco and in another case it was free.

Other topics mentioned were the use of video boards to increase sharing the experience and the influence of Reality TV on events.

One of the more surprising innovations is the use of robots at events as members of the audience. Instead of attending the event, you hire a robot to ‘attend’. The robot narrowcasts to you from the event and you give the robot instructions on what to do  – such as “cheer”. This means you and friends can ‘enjoy’ the event from your own lounge room.

Gamfication was only mentioned, but it is looming trend for events. The various audience experiences at an event are developed into digital games with rewards.

In summary the discussion was short, intense and covered areas of real practical use. Although the cashless event took up much of the discussion it demonstrated how technology has impinged on traditional ways of making money from an event. The festivals and events industry have seen the enormous mistakes of the book and music industry and do not want this to happen to events.